TO EAT OR NOT TO EAT: FOOD AND WATER ARE OUR BIRTHRIGHTS, NOT A POLITICAL CRUCIFIX.

A 20 year old young man gets taken to court for STEALING the rubbish food that Iceland was sending to the dump.

The young man is from a dysfunctional family, doesn’t have a job, has a low IQ and education level, his clothes are old, has problems coping with a cut-throat society.

Now he is hungry.

He has no money, jewellery or saleable items and no one to borrow from.

WHAT IF IT IS A WORKING FAMILY WITHOUT FOOD?

WHAT IF IT’S A SINGLE PARENT GOING WITHOUT FOOD?

WHAT IF IT WAS YOU GOING WITHOUT FOOD?

THERE ARE ONLY FIVE OPTIONS LEFT AND ALL FIVE ARE ILLEGAL:

1/ Go the local church and beg (begging is illegal) a meal, success probability 5%.

2/ Go into a shop and beg a meal, success probability 0%.

3/ Knock on some-ones door and beg for a meal, success probability 1%.

5/ Steal, (selectively illegal depending on status and occupation), success probability 80%.

As a soldier, hunger is a close companion when you are out on long ops, so we would sneak into a farm and help ourselves.

Was it stealing or keeping ourselves fit for action?

It was stealing for survival and to complete my mission: nothing more.

No criminal intent whatsoever in the actions of stealing.

The intent of the young man who was arrested for stealing from the ICELAND bins was not criminal, it was survival.

And here is where politicians and INDIVIDUALS WHO OWN massive food corporations are behaving like criminals of the worst kind:

They are legislating for the rights to survive.

They are pricing our survival mechanisms.

Without food and water you die.

Without work there’s no money: no money, no food, you die.

WITHOUT MASSIVE INVESTMENT IN JOBS THERE WILL BE EVEN LESS MONEY.

And this is the point I am making, as an individual we have a human right to food and water.

If there is no investment in the country, there is no work, no work is not the individuals fault, IT IS THE FAULT OF THE STATE FOR NOT BRINGING IN INVESTMENT.

Multibillionaires, companies with assets worth trillions of pounds, celebrities suing companies for millions over a photo, politicians ripping off the people constantly - double standards in law for the wealthy and the poor, and now the truth about our country’s direction…

For hundreds of years the wealthy and the politicians, along with the massive companies they owned, decided that to secure their own future and that of their ancestors would be solely dependent upon a subservient population.

A subservient population the “norm”, as education was frowned upon for the majority.

With mass printing people learned to educate themselves, this led to ideological revolutions, because ideas of the many do not meet the needs of the wealthy few.

With the need to keep their status and position (AND OPINION) the wealthy have bought and sold EVERY ideology thought up.

Our upper echelons of society, including our bankers and politicians, MADE THIS SITUATION OUR NATION IS IN.

And a young man is criminalized for looking for his basic human right to food.

What makes it immoral is our politician refused FREE FOOD AID FROM EUROPE.

This young man did not need to be in the situation if our politicians had accepted the food aid.

We need to do something before we all have to suffer the fate of legally being allowed to eat or not to eat.

You can discuss this article on the Global Fightback forums here. 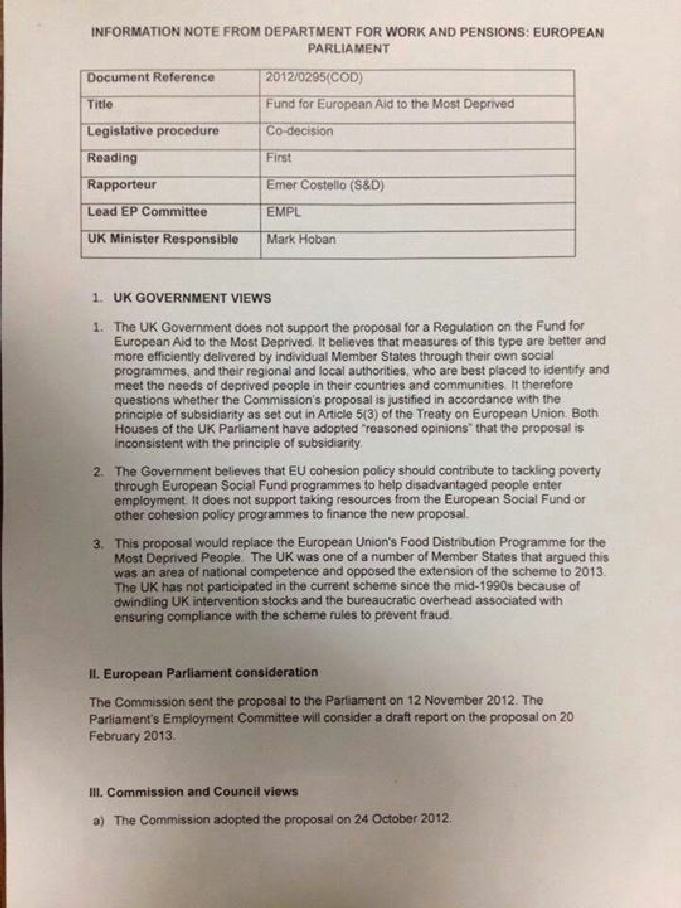